A Dream of Genuine Quality

The essence of every place expresses itself in the character of each separate element:

houses, fields and faces of the people who inhabit it.
That unique and mysterious essence needs to be cherished in your mind, in your heart and in your hands.

This is why Masseria Li Veli wines are produced with local varieties, in harmony with the history and tradition of the terroir, combined with the agricultural and winemaking know-how necessary to confer an elegant, fresh and enjoyable style.

Salento (in dialect Salentu; in Greek Σαλέντο, Salénto), also known as salentine peninsula, is a sub-region of Southern Apulia, between the Ionian to the West and the Adriatic to the East. It encompasses the “heel” of the Italian “boot”.
The inhabitants of the area, which includes the entire province of Lecce, a large part of the province of Brindisi and the Eastern part of Taranto, are characterized by a different linguistic background from the rest of Apulia. From a juridical point of view, the Salento region, first under the Kingdom of Naples, then under the Kingdom of the two Sicilies, almost perfectly coincides with the territory called Terra d’ Otranto, which for centuries survived administrative reforms.

The climate of this area is ideal for the cultivation of the vine: the mild winter and hot and dry summer, the strong thermal excursion, with the cool night breezes mitigating the heat of the day, make this small peninsula the perfect place for the production of great wines.

The maritime climate, with scarce and irregular rains and with sea breezes which mitigate the hot summer, makes the winter milder and shortens the spring and autumn seasons.
The average temperature all year round is 16-17°, with maximum temperatures reaching 38-40° and minimum 2-7°.

The soil of Masseria Li Veli is karstic, permeable and abundant in water thanks to the large underground water reserves present in the area which build up during the winter in the deeper layers, ideal for the cultivation of vines.

These conditions allow the vine roots to access water and get through the driest summers without stress.

The soil, mainly calcareous and clayey with gravel and tuff, creates the ideal conditions for vines producing strong, generous and warm wines with broad and persistent perfumes. 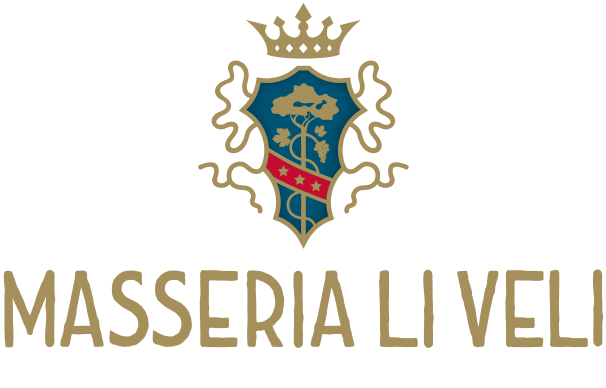